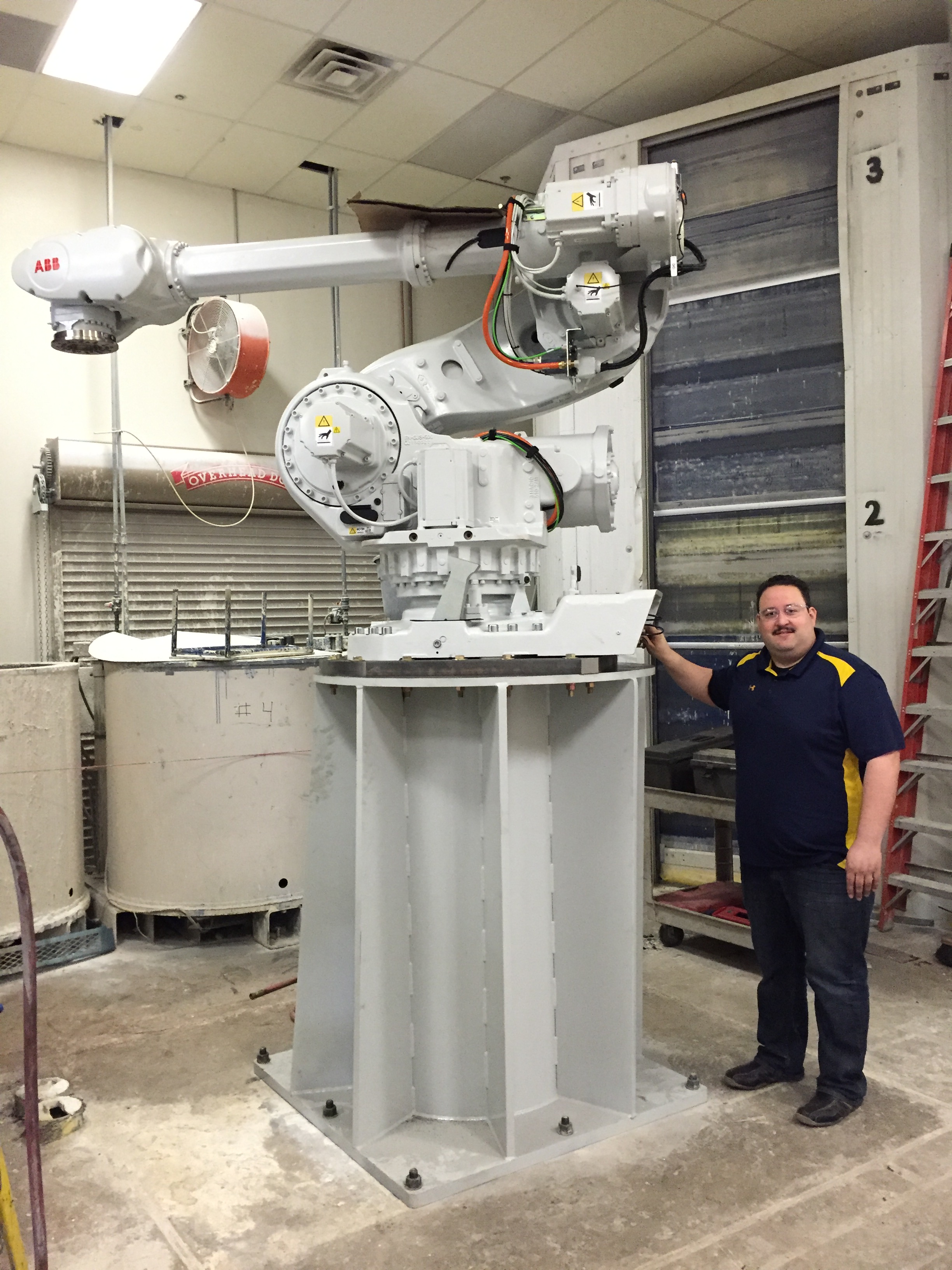 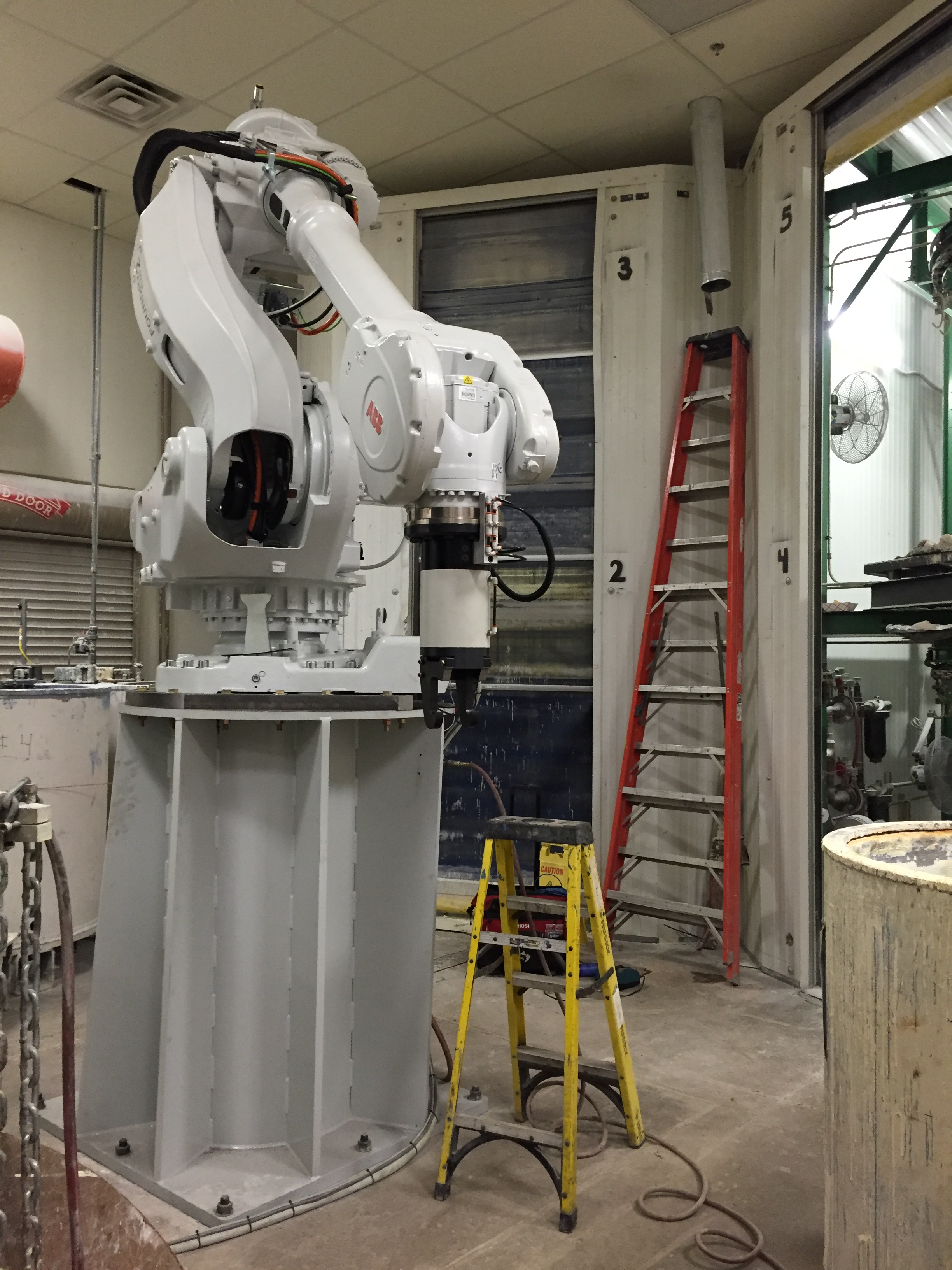 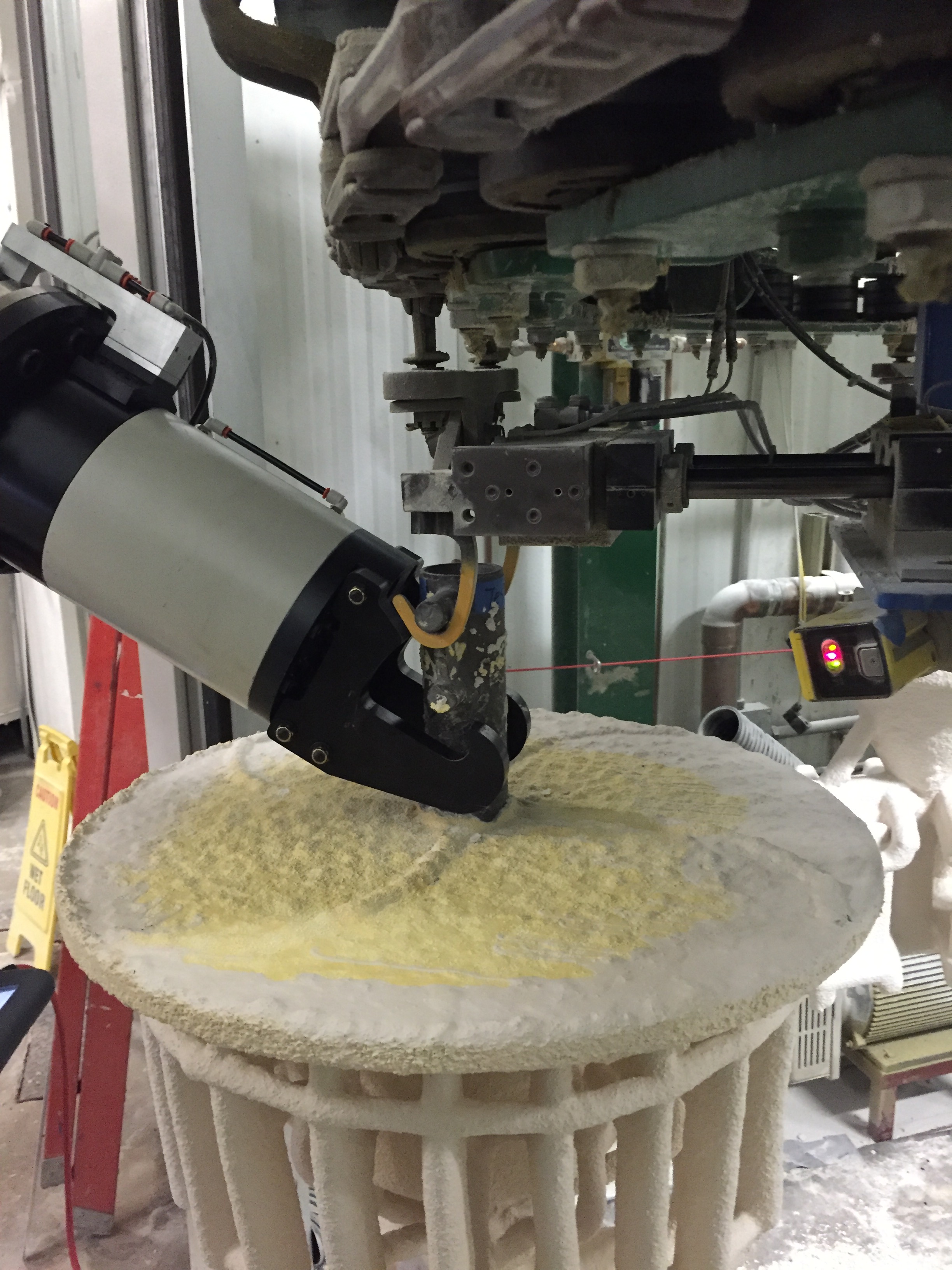 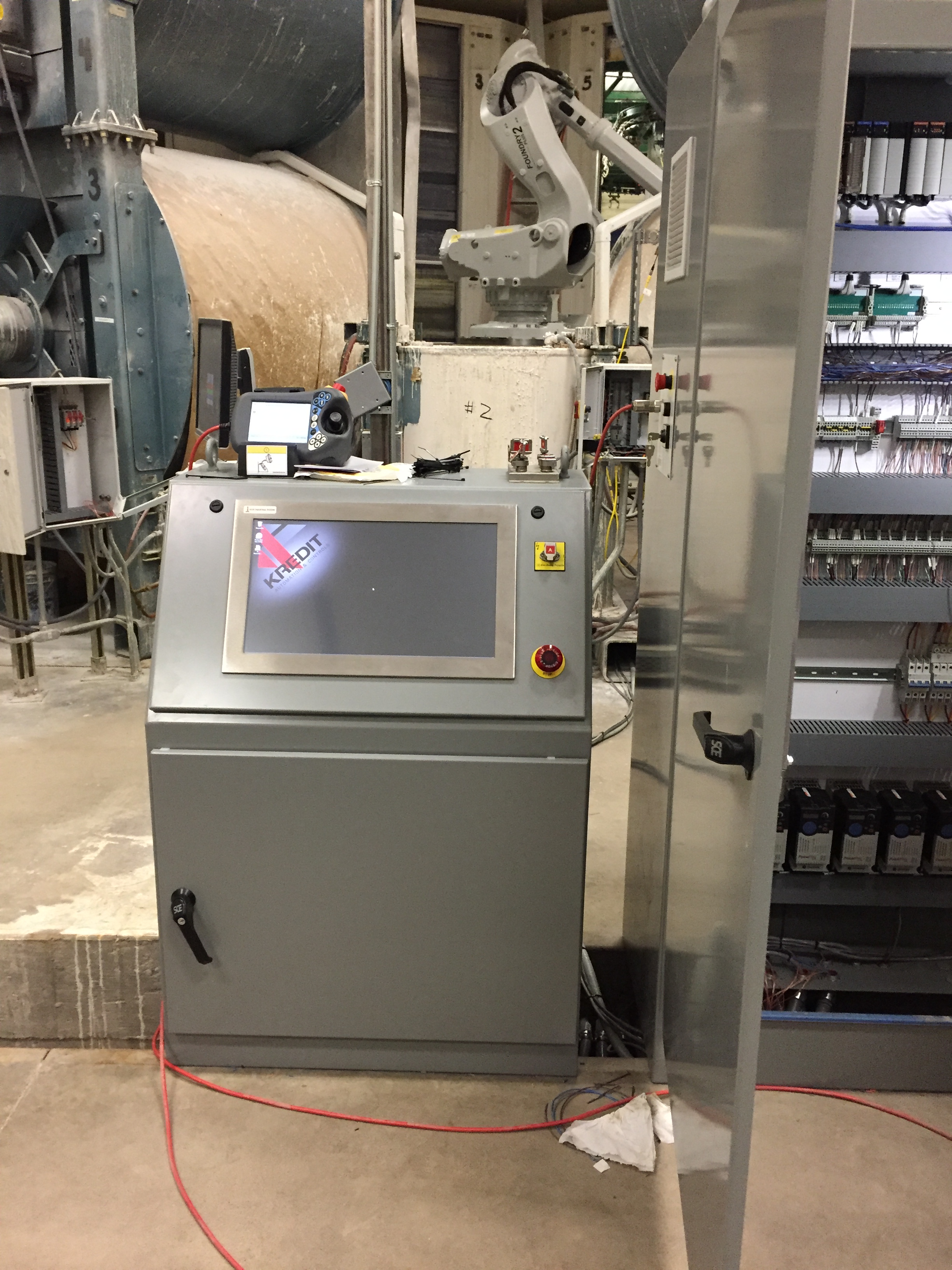 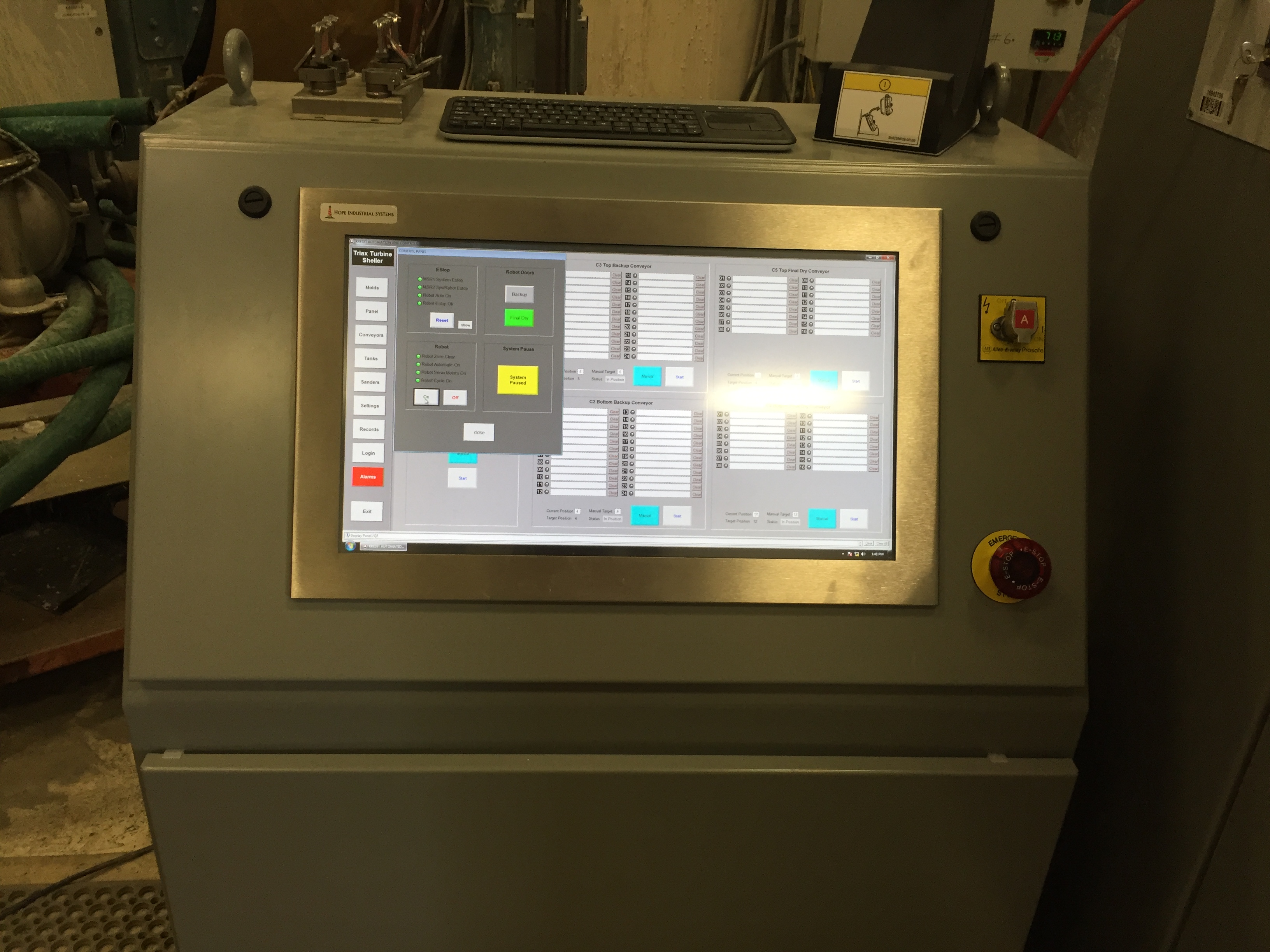 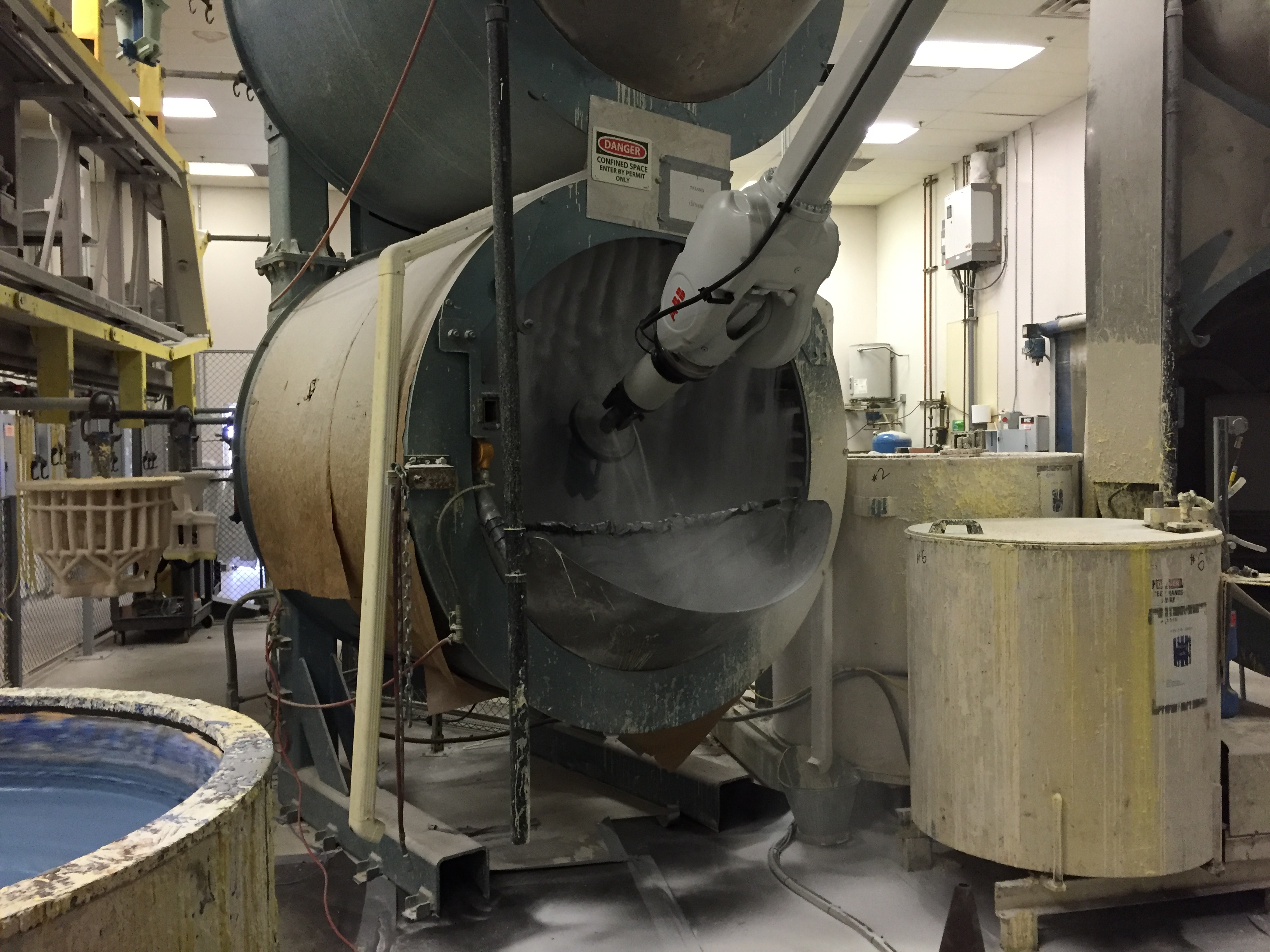 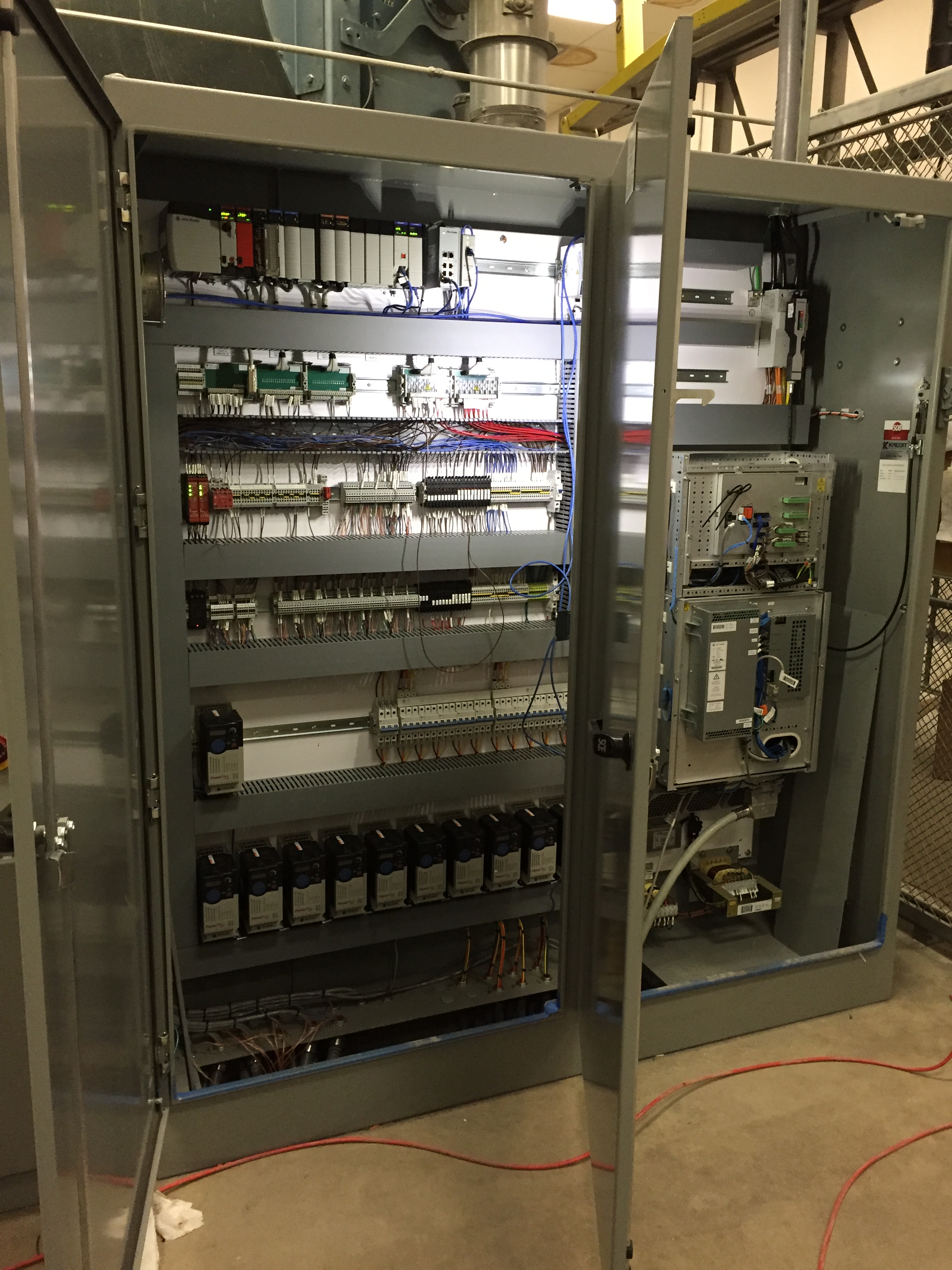 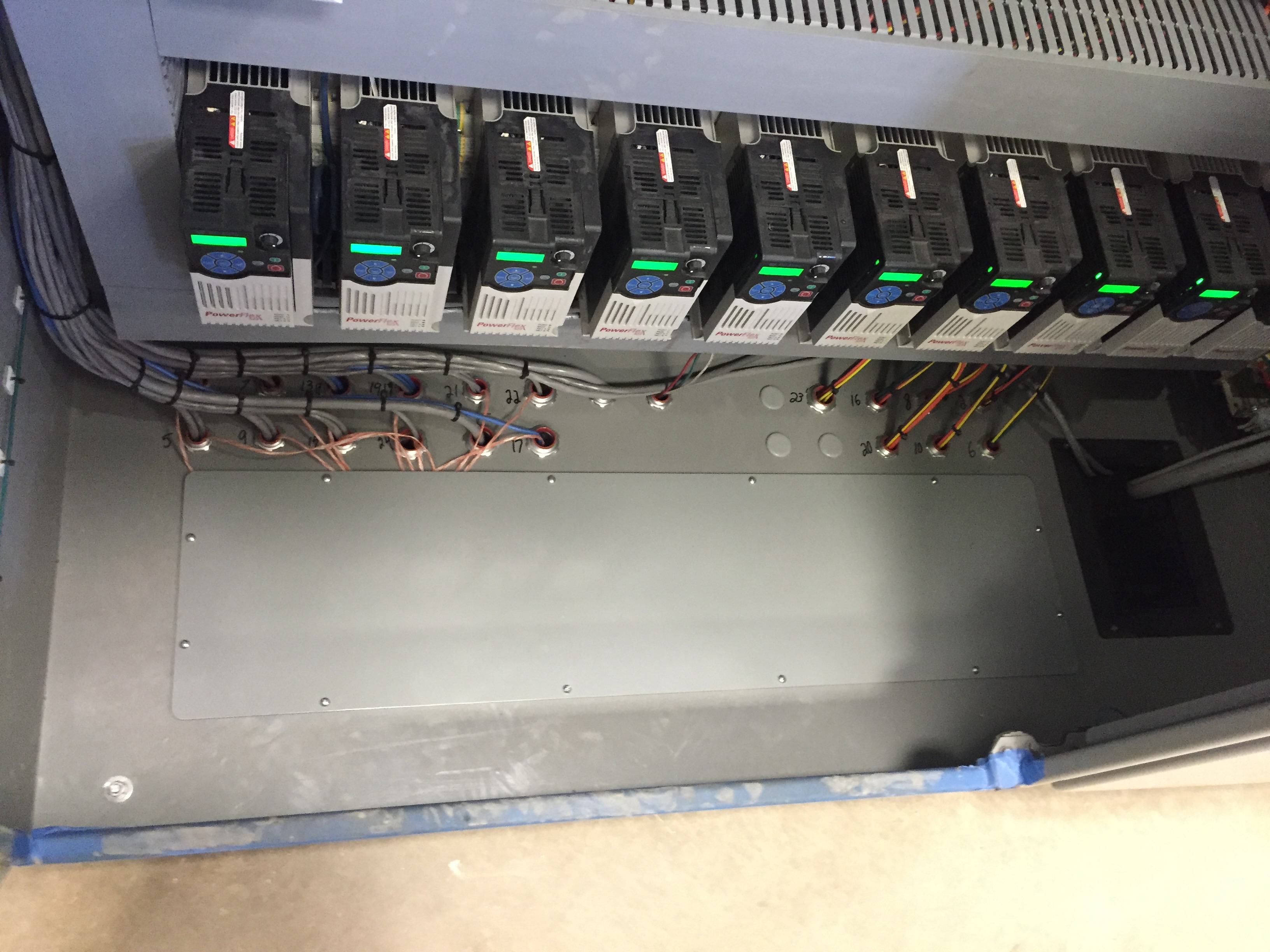 Kredit Automation and Controls completely retrofitted the controls on a system that produces molds for casting. The customer manufactures turbine engine components. The old control system was a functional but aging system based on a Vulcan Engineering Electrobot robot, an Allen-Bradley SLC-500 PLC, and a Visual Basic program. The old system had almost all the sequential logic in the Visual Basic Program.  The new control system features a new ABB IRB7600 Foundry Plus 2 robot and a ControlLogix PLC and FactoryTalk HMI. The new robot is faster, more accurate, and easier to program. The new PLC contains all the sequential logic program and robot commands. It is modular, structured, commented and designed to be straightforward to work on and upgrade for years. The opportunity was also taken to make significant improvements to the sequence, the ease of robot use, and the operator interface.

The process of making a mold starts by making a dimensionally exact wax replica of the part to be cast. At this plant a typical part is a turbine blade. A group of wax replicas and final production parts are shown in the figure. (The two sides don’t show the exact same parts but the idea is conveyed).

Next a mold is produced by a shelling process, which is what this control system and robot control. The shelling process puts a series of coats on the wax replica. These coats are made of slurry and ceramic sand. Then the wax is melted out and the remaining shell is now a mold. (The melt out of the wax replica to yield the mold is where the name “lost wax” comes from.) The actual production part is then produced by a casting process using the mold.

The lost wax process consists of a series of “dips”. A dip is the application of slurry and sand followed by a drying time. A typical mold gets about 6-10 dips. The slurry is a highly engineered material that penetrates every nook and cranny of the surface and adheres closely. The robot dips the mold in a slurry tank as it turns and rotates the mold to get a coverage that is as even and complete as possible. The robot then lifts the mold out of the slurry tank and rotates the mold around over the tank to let slurry drip off and further even out the coverage. Next, the robot takes the mold into a rotating drum called a rainfall sander. Ceramic sand is gently and evenly poured over the mold as the drum rotates. As the rainfall sander rotates the robot moves the mold around over a wide range of angles to achieve as even a coverage of the sand on the slurry layer as possible. The sand adheres tightly to the slurry. This layer is dried in a drying tunnel under carefully controlled environmental conditions for 2-6 hours. Then six to ten more dips are performed. There are seven different slurries and four different sands. A recipe specifies which slurry and which sand is used for a given dip as well as the dry time. After the last dip and the final drying the shelling process is complete. Downstream in another section of the plant the wax is melted out in a furnace and the remaining mold undergoes some final prep to get it ready to use in the casting process.

Programming the old robot had always been difficult for the customer. The robot operating system was an early vintage. The user application program was not the friendliest in terms of end user modification and expansion. The net effect was that modifying or adding profiles was a chore. A profile in this application is the series of moves inside or above a slurry tank or rainfall sander. The new robot program was designed to significantly improve the user experience over the previous robot. The modern operating system and an application program designed with the end user in mind make configuring profiles a much more straightforward task. One of the most vexing problems with the old system is that it would get stuck or crash or if someone hit an estop and the only way to recover was to cycle power to the entire system, re-home the robot and start everything over. The progress of the molds was lost which required re-entering a lot of information in such a way as to artificially progress to where they had been. This required a lot of effort, was subject to errors, and caused large amounts of downtime. The new system can recover from such problems without nearly the headaches or effort. The new system has also been programmed with cycle pause and immediate robot pause features, neither of which cause any issues and can be used and then removed for an error-free mold sequence restart. Because of the improved interface to the robot additional information such as the level of the slurry tanks (measured with newly installed laser sensors) can be sent to the robot where the dip profile can be adjusted accordingly.

The old robot had more linear actuators and fewer servos than the new robot. Some of the mechanical linkages had developed enough wear to cause significant accuracy problems. This required lowering the speed of robot actions. Even with slower speed mishaps such as missing a hook were starting to occur more frequently. Sometimes the old robot would have problems to the point of actually damaging the molds, which was a very expensive problem. As one would expect, the new robot was extremely accurate even at much greater speed.

The old system had the main program written in Visual Basic. All the sequential logic and robot commands were in the VB program. The new control system placed the sequential logic and robot interaction in ladder logic in the ControlLogix PLC. This code is modular, structured, commented, and designed to be accessible to programmers needing to make modifications and additions. The fact that the core control is in a ControlLogix guarantees upgrades will be straightforward for many years.

This project succeeded in the primary goals of modernizing the equipment and thereby addressing maintenance and obsolescence concerns. But the opportunity to improve the control algorithms and operator interfaces were also of great value to the customer. The new robot’s accuracy and superior programming interfaces caused the project results to exceed expectations. One of Kredit Automation’s mechanical engineers designed an innovative end-effector that was much improved over the previous one. A special 60” pedestal of high strength, high stiffness steel was engineered to allow the new robot to reach all the existing points that the old robot did, facilitating a more compact and efficient robot motion system.  In addition, most of the programming and robot commissioning was done ahead of time at Kredit Automation’s facility to reduce the amount of customer downtime during installation and start up. The time to remove the old robot, install the new robot, install the new control panel, rewire the entire system, do an I/O checkout and debug logic to the point of running molds was only two weeks.