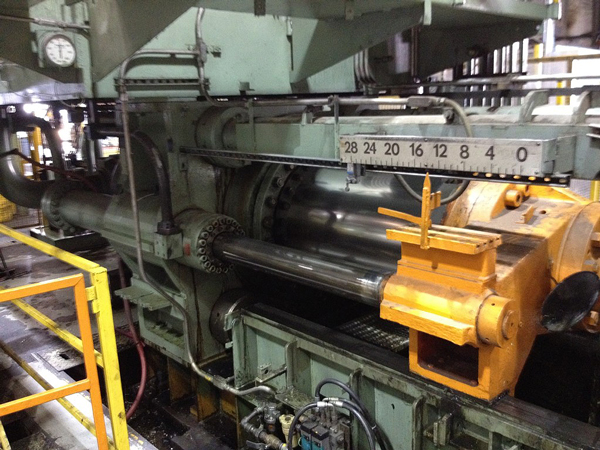 Kredit Automation has done over a dozen aluminum extrusion press control system retrofits. Extrusion presses last for decades and periodically need a new control system. Protection against obsolesce and parts unavailability are always motivating factors. Sometimes the owner also wants to make changes to the controller programs and operator screens. And newer technology can be leveraged for performance and features. Ethernet connectivity opens up doors to enterprise integration. All these factored into the retrofit described in this case study. But the owner had put off doing a retrofit for years because they couldn’t accept days of lost production. Kredit agreed to get everything ready and do the install and startup over a weekend. The press was taken out of production Friday afternoon and was back in production Monday morning. In this particular retrofit the PLC program logic was not re-written but was converted from PLC-5 to ControlLogix. But in the majority of the retrofits the program is re-written to allow features and improvements that meet the current owner’s needs and take advantage of new technology and connectivity.

The customer owns and runs just two extrusion presses. The retrofit was done on their Sutton 2500 ton press. They run soft alloy and most of the customers are in architectural industries such as door frames. Lost production has an immediate impact on their bottom line. This had caused them to continually put off a retrofit even though they wanted to do it. Kredit Automation agreed to a weekend startup and so the owners decided to go ahead with this important project based on the expectation that production loss would be minimal. This required an unusual level of preparation.  Fortunately things went well and no unexpected problems arose.

This press is somewhat unusual in that it has electric pump control instead of hydraulic pump controls. The speed control is done by adjusting pump speed with a VFD instead of adjusting pump stroke. Sutton did not produce many of these presses. Because hydraulic pumps still draw significant amps when running idle, using electric pumps saves significant energy.  Other benefits include decreased oil volume, easier maintenance of the main cylinder and the hydraulic units, and decreased oil leakage.  Interestingly this design didn’t catch on when this press was developed but a literature search shows increasing R&D in this area today, especially by Ube. Knowledgeable readers will notice the difference in the pump skid in the photo with other Sutton presses.

Usually we completely re-write the PLC program when we retrofit a control system for a press. We create well-structured, well-commented modules of code that are easy to troubleshoot and modify. The idea is to make the system amenable to integration and friendly to work on. But this particular retrofit was different because minimizing downtime took priority over some of the benefits of a new program. Because we were changing from an older Allen-Bradley controller (PLC-5) to a new one (ControlLogix) most of the program could be reused. Our engineer very carefully attended to the occasional instances where the old instructions or logic had to be changed.  We obviously always try to make a program work right when it’s developed but in this case exceptional effort was made to achieve error-free conversion and mentally debug the occasional instances of new logic. The resulting program was in fact error-free. Some adjustments to timers and other settings were required but the logic worked flawlessly. This helped offset some time lost on some other minor challenges and issues that arose

Among those issues that came up on the weekend startup were routine challenges with the new Profibus communication card as well as some issues with drivers and configurations for the Siemens drives that run the pumps. The technology for integrating these drives had improved substantially since the last control system. Along with those benefits the requirements to get it all working had also increased. But these issues were not too bad and were dealt with fairly quickly. The result was a much better interface to the drives. One of the important benefits was the ability to do a remote fault reset. In the old system a maintenance tech had to open up the cabinet and do a multistep reset procedure, often more than once. This was disruptive and arguably dangerous. With the new interface we had full access to all drive controls and parameters which will allow future features such as amps display.

Although the PLC logic was not substantially changed, the operator interface was completely redone. The previous HMI was used as a guide, but we had a much bigger screen and much improved development software to work with. We took the opportunity to create a much better HMI with snappier screens that are more functional and responsive. Often sections of two or more screens were consolidated but we still reduced clutter and achieved a clean, functional design. Rockwell FactoryTalk SE was used on this project.

One significant change to the system was creating a new recipe system. A simple Access database was used and was integrated into the HMI to make it appear to be part of the HMI. The old recipe system had failed and no one could work on it. The new recipe system is cleaner and simpler and is built on a technology (Microsoft Office) that is standard off the shelf and simple to use.

One of the benefits of these new systems going forward is being on Ethernet. EtherNet/IP is an industrial Ethernet network that combines standard Ethernet technologies with the media-independent Common Industrial Protocol or “CIP.” Because it is fully compatible with standard Ethernet it facilitates a connected enterprise. Many of our customers have started moving in this direction as an important early step in standardization aimed at improving information flow and plant productivity.